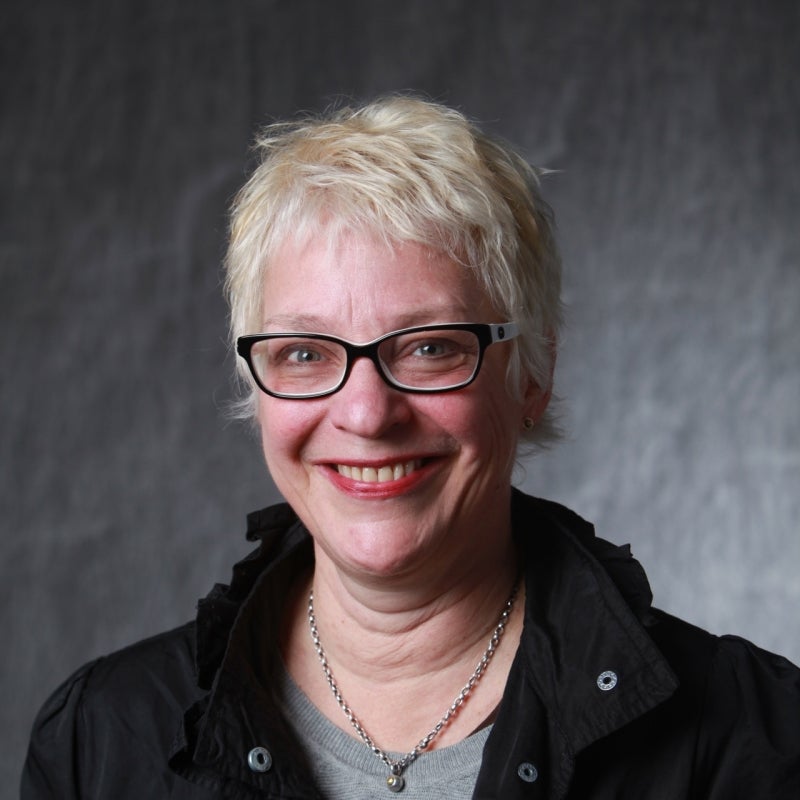 Kathy High, Professor of Video and New Media, is an interdisciplinary artist working in the area of technology, science and art. She produces videos, photographs, writings, performances and installations about gender and technology, empathy, and animal sentience. In the last ten years she has become interested in working with living systems, animals and art, considering the social, political and ethical dilemmas of biotechnology and surrounding industries. Her most recent art works include a video documentary about green or natural burials, entitled Death Down Under; and a performance/visual arts project called Blood Wars that uses white blood cells to test an individual’s strengths (see http://vampirestudygroup.com/bloodwars/). These projects have allowed High to investigate areas such as decomposition and the immune system.

High is also a scholar of the history of video technologies, systems and video art, and has a background in both writing and publishing (see e-felix.org for reference to a video art journal, FELIX, founded and edited by High in 1990s-2003). Her co-edited book The Emergence of Video Processing Tools: Television Becoming Unglued, with Sherry Miller Hocking of the Experimental Television Center, and Mona Jimenez of the Moving Image Preservation Program at NYU, on the history of video imaging tools will be published by Intellect Books (UK) in 2013. This text is the culmination of seven years of research into the histories of video imaging tool production in the USA. The book presents stories of the development of early video tools and systems designed and built by artists and technologists during the late 1960s and 70s, and how that history of collaborations among inventors, designers and artists has affected contemporary tool-makers.

“I’m interested in notions of neo-dead - not really living, not really dead: The idea about immortality and the quest for immortality that I think drives a lot of scientific research,” High said. “Vampire Study Group projects specifically look at the body, the biological manipulation of life, and present a dystopic view of the future of the human species. In cultural history vampires play on erotic fantasies and fears. Currently there is a surge of interest in the vampire myth seen in popular media with such television series as True Blood, and movies such as Twilight and Let the Right One In. This popular culture trend may be commenting on more than it knows about the state of society and science.”

Her video works touch on topics including body politics and the paranormal, and have been shown in festivals, galleries and museums both nationally and abroad, including the Guggenheim Museum, and Museum of Modern Art, NYC, Catalyst Arts, Belfast, Ireland, Time Based Arts, Hull, U.K., Videotage Art Space, Hong Kong, as well as aired on PBS.

She has received numerous awards for her video works including grants from The Rockefeller Foundation, New York State Council on the Arts, and the National Endowment for the Arts. She has been an independent curator for a number of years, having started the video exhibition program at Hallwalls Gallery in Buffalo, NY, and curated the Microwave Festival in Hong Kong, as well as television series (REEL NEW YORK on WNET) and video exhibitions internationally. Her work, “Embracing Animal”, was exhibited in “Becoming Animal” at MASS MoCA, North Adams.

The following is a selection of recent publications in Scopus. Kathy High has 8 indexed publications in the subjects of Arts and Humanities, Engineering, and Agricultural and Biological Sciences.