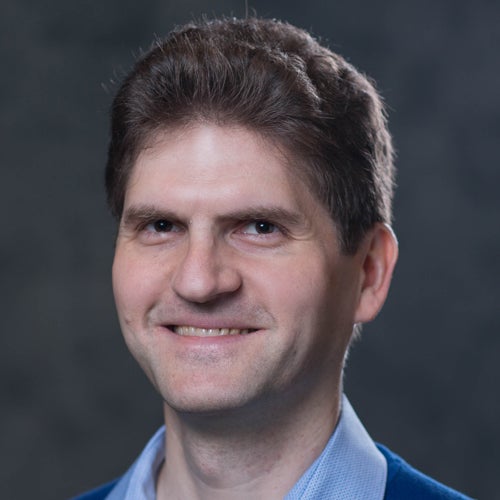 Dr. Kramer received his B.A. in Physics from Princeton University, and earned his Ph.D. in Applied and Computational Mathematics at Princeton University under the supervision of Professor A.J. Majda.  Dr. Kramer took a three-year Courant Instructor and NSF postdoctoral research fellow position at the Courant Institute at New York University, before joining the faculty in the Department of Mathematical Sciences at Rensselaer as an assistant professor in 2000.

Dr. Kramer's research focuses on the application of ideas and techniques from probability theory and differential equations to model and analyze complex systems which evolve in time and involve too many variables to represent explicitly in a practical computational model.  The effects of the unresolved variables on the quantities of interest are treated in a statistical fashion.  Current areas of research include transport within biological cells, the swimming dynamics of irregular colonies of flagellated cells, statistical modeling in environmental science, and the statistical inference of neuronal network topology from firing data.  This work is in collaboration with scientists and engineers at Arizona State University, University of Colorado at Boulder, as well as at Rensselaer.

Dr. Kramer supervises the preparation of undergraduates at Rensselaer for the annual Mathematical and Interdisciplinary Contest in Modeling, and supports the organization of the Mathematical Problems in Industry Workshop (2000-present).

I apply ideas from probability theory and differential equations to model and analyze complex systems which evolve in time and involve too many variables to represent explicitly in a practical computational model.  The effects of the unresolved variables on the quantities of interest are treated in a statistical fashion.  My current applications of interest are:

The understanding afforded by the first two basic science studies could have implications for synthetic nanotechnological devices intended to perform transport of materials.

I generally teach classes involving probability and/or dynamics.  I strive, when possible, to involve structured mathematical models in any class to show relevance of the material to real world applications, and to introduce another dimension of critical thinking into the pedagogy.

MATH 2400:  Introduction to Differential Equations.  I emphasize modeling and geometric understanding beyond the technical solution methods.

MATH 4300:  Introduction to Complex Variables.  This beautiful theory was very useful for clever approaches to problem solving, but this is now mostly buried in symbolic computing packages.  So it should be viewed as a pure mathematics course, where the goal is to develop the capacity for abstract thought.  As a single complex variable is two-dimensional, the theory can be largely connected with concrete visualization, until you realize that a complex function of a complex variable requires working in 4 real dimensions.  Contemplating such functions, especially when conceptualized as Riemann surfaces, will exercise the imagination just beyond the limits of tangible realization in our universe.

MATH 4700:  Foundations of Applied Mathematics.  A summary of important elements of mathematics for problem solving in applications, introducing the "modeling'' approach and the various modes of reasoning involved beyond equation processing.  I'm thinking about how to incorporate data science a bit into the course.

MATH 6660:  Stochastic Processes and Modeling.  An introduction to probabilistic models that evolve in time.  The focus is largely on discrete-time and continuous-time Markov chains, though we cover the basic methods that apply also to stochastic differential equations.

With Dr. Jeffrey Banks, I advise the mathematical science majors in the Class of 2026.

The following is a selection of recent publications in Scopus. Peter Kramer has 34 indexed publications in the subjects of Mathematics, Physics and Astronomy, and Computer Science.